The remarkable story of Hebridean women in the struggle for equality and the vote. 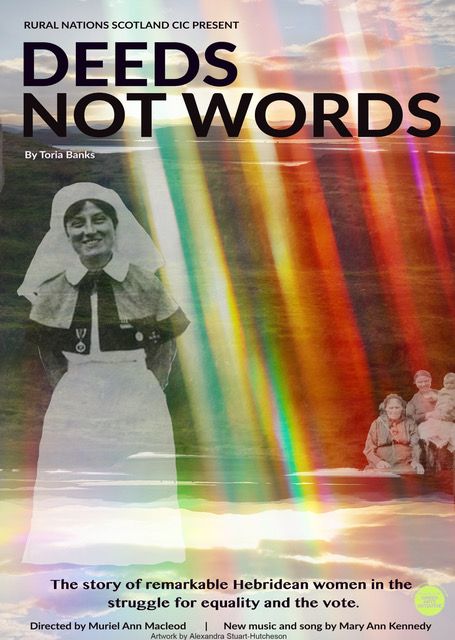 Images courtesy of the National Army Museum and the Tormod an t-Seòladair collection.

Deeds not Words is a new Hebridean play being produced in the Isle of Lewis by Rural Nations Scotland CIC in partnership with An Lanntair. The play will tour to rural venues across the Outer Hebrides in February 2018. The play has been written by London based playwright Toria Banks based on brand new research into the role of Hebridean women in the suffrage movement.

The play presents the surprising narratives of several Hebridean women taking us out of Lewis to Serbia and back again to St Kilda featuring familiar places and names but telling some astounding, unheard of stories of bravery and resourcefulness that are anything but old fashioned. Focusing on stories of local woman including Helen MacDougal from Barvas, the Stornoway suffrage society and the herring gutters who took up the call of the munitions factories. The bilingual play will be directed by Muriel Ann Macleod who through the project hoped to make a piece of theatre for Island women, to encourage and inspire women today to engage with political and local representation and take action in their own communities. Both English and Gaelic language and song combine with newly created and archive audio visual elements  to tell these remarkable true stories.

A small cast of three Hebridean and Scottish actresses will take on the variety of roles played out with a new Gaelic song and music commission from Mary Ann Kennedy and an almost entirely female production team. Deeds

not Words evokes valiantly the 100th year of women's suffrage in 2018.

The play received funding from the Scottish Government, CNES, Bòrd na Gàidhlig, Point and Sandwick Trusts and LEADER as well as being supported through local contributors and sponsorship from 17 local businesses.

The opening night of Deeds Not Words took place at An Lanntair arts centre in Stornoway on the 15th February 2018. 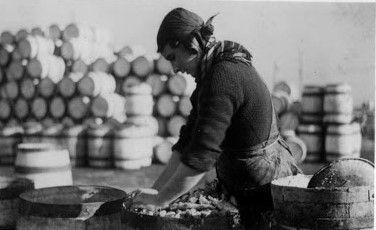 This new play was commissioned from London based Toria Banks who has delivered Hebridean scripts before as dramaturg on Roghainn Nan Daoine (director, John Wright 2011) and then in 2012 she developed the script for We Have Won the Land with Muriel Ann Macleod (director).

In the General Election of 1918 women in the UK had the vote for the first time. Not all women, but most of those over 30. In the same year, the Western Isles returned their own MP for the first time. These two facts generate fascinating questions for a play to address:  What was the story of women's suffrage, so far away from the centres of the movement in London and Glasgow? What did it mean to the women of the Hebrides, from Stornoway to St.Kilda to be given a vote? Or in the case of the youngest and poorest, to be denied a vote? And how can we tell these stories from the periphery of the UK, of Scotland, of our history?

In 1918, at the end of the worst conflict the world had ever known, the stakes could not have been higher. What's more, in the same year, the Isle of Lewis was sold to a new owner. But the election of that year offered voters a choice between two politicians from the same party. The only alternative to the Liberals, the Land League candidate, lost his deposit. Turn out was low. What exactly was it women had fought to participate in? And was it religion, culture, language or apathy that held women voters back?

To create this play, Rural Nations Scotland CIC artists have undertaken considerable research within the community, with local and national historians and in libraries accross the country to look at what Hebridean women did during the 1911 to 1918 period.  We have uncovered a powerful and remarkable history of our women and their unique achievements.

The play raises questions that still plague us as a nation today, about the value of the democratic process, of who we choose to represent us, and whether it matters.

In the play we will see the individual stories of a number of Hebridean women who have left a trace  in the historical record of the early 20th century. Women who participated in the story of women's struggle to win the vote, or were amongst the first to use it.

Through drama, humour, storytelling and music, the audience can share in the imaginative, compassionate act of reanimating these women from the traces they have left behind. 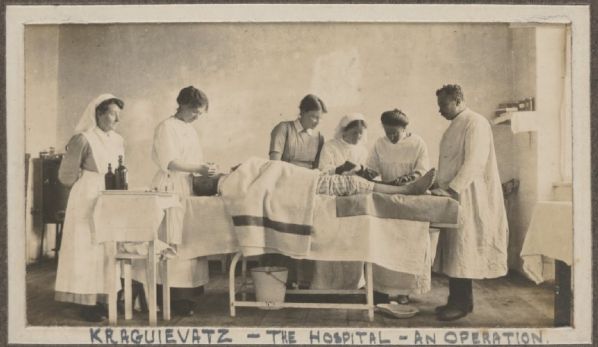 The new writing commission for Deeds not Words has been funded by CNES and a local bequest from Janet Macleod(1935-2014).  Rural Nations has  developed partnerships with the following organisations as the work was developed towards production:

The Playwrights commission for Deeds not Words was funded by Comhairle Nan Eilean Siar and a bequest from Janet Macleod (who was a domestic science teacher in the Hebrides beween  1959 and 1987).

Find out more on the Scottish Women's Hospitals website.