Working across a broad portfolio of arts initiatives Rural Nations CIC delivers the annual Hebrides International Film Festival and produces our own Island originated professional theatre and short film projects in partnership with artists and organisations based across the UK and from other countries.

Our film work is focussed in 2020 on the production of a short drama around Iolaire survivor guilt, based on true Island stories, we are working with award winning Scottish screen writer Jim McRoberts and currently building an international film crew to deliver the work.  The Gaelic language short film which is in the process of seeking funding is being created for international Film Festival markets. Keep an eye on this website for more details over coming months.

Other theatre initiatives include the development of family puppet show for Western Isles audiences presenting a new collection of Hebridean puppet characters.

The company is also working on a new phase of research and development where we are looking at digital innovation using theatre and storytelling presented in the context of extreme environments and virtual space.

International audience of partners and artists from Reclaim the Future at a Psalmboat event at the Bays Centre Harris in 2018. photo by Mairi Macleod.

The IETM Fresh Perspectives series takes you on a playful but serious journey along the issues at stake when designing a mixed reality experience in the context of theatre and performance. 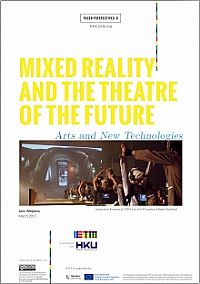